My first brush with running for a cause

A few days ago, I had the opportunity to participate in the Dawn to Dusk marathon 2014 at the IIT campus in Chennai. It was an event organized with a lot of passion by the folks at Neville Endeavors who were ably assisted by the volunteers of the Chennai Trekking Club, with the proceeds from the event going to the ‘Bal Sanjeevani’ project for the treatment of cerebral palsy.

The event was a hugely successful one in terms of participation. The event, first organized in 2011 with 600 participants, had seen the participant count shoot up to 6000 in just its third year. That is quite an achievement. The organizers must have done a fabulous job of promoting this event. The event was not lacking in celeb quotient either. Former tennis players Vijay Amritraj and Anand Amritraj and actors Karthi Sivakumar and Arvind Swamy flagged off the event. It was heartening to see so many people, both young and old, and belonging to different walks of society, eschewing sleep in favor of fitness and turn up at the IIT campus on a lazy Sunday morning. I was pleasantly surprised to see such a good turn out for a non-cricketing event in a cricket crazy city like Chennai.
Personally, it was a wonderful experience for me. I’d always wanted to have a taste of long distance running but had never really attempted it before. So, when this opportunity came my way, I took it with both hands. I initially thought of taking part in the 10 km course, but eventually registered for the 21 km course since most of my colleagues were enrolled in that category.
I hardly had any practice going into this run, so I kept my expectations very low. My sole objective was to complete the distance without dropping out midway through. I initially started off with slow jogging and alternated it with brisk walking. Around the 10 km mark, I started getting blisters at the sole of my feet, so I cut down on the running, and walked the rest of the course.  I managed to reach the finishing line in just over 3 hours’ time.
I’d never run or walked such long distances before so it was a tiring experience, to say the least. Towards the end of my run, I could barely walk, as my knees, calf muscles and thigh muscles were in a lot of pain. The blisters on the feet were not helping either. But it didn’t matter, as the experience of taking part in a half-marathon was something to savor. Whenever I felt like taking a break, the motivational cheers by the volunteers kept me going. It felt good when I finally crossed the finishing line!

So my first half marathon went on well without any hiccups. As I clutched my participant’s medal on my way back home, the words of the event host kept coming back to me - “nobody goes home a loser today”. She was right. At the Dawn to Dusk marathon, everybody was a winner.
Posted by Arun at 5:21 AM 11 comments:

One holy union. Three days of rituals. Many days of preparation.

Accepting a new person into your life. Knowing him better. Sharing. Caring. Giving. Forgiving. Making him your better half.

Moving away from your biological parents. Accepting hitherto unknown people as your new parents. Wondering how they will turn out to be.

Moving away from your hometown. Staying in an alien city. Gradually coming to the terms with it. Making the place your own.

Multiple relatives to deal with. Many moments of awkwardness. Occasional forced smiles.

Bearing a boy. Raising him. Dealing with his tantrums.
Being there for him when he is in distress.
Catching him when he falls.
Teaching him life lessons.
Watching him grow up in front of your eyes.
Experiencing the joy of motherhood.

Some moments to remember. Some to forget.

Quite a journey it must have been.

It all started on this day, a decade ago.

Email ThisBlogThis!Share to TwitterShare to FacebookShare to Pinterest
Labels: anniversary

Like this infographic? Get more content marketing tips from Copyblogger.
Posted by Arun at 9:32 AM No comments:

I am not a big fan of Airtel's mobile services, especially their customer care. I've heard people ranting about being overcharged by Airtel. I have even had a bad experience with their customer care when they disconnected my post-paid CUG mobile connection without any prior intimation, which ultimately turned out to be a flaw in their process. Sometimes I've had the impression that Airtel treats you nicely only as long as you are their prospective customer. Once you become their customer, their attitude can change quite dramatically. Hence, I was pleasantly surprised when I got this SMS from Airtel.

Thank you for paying your Airtel Mobile bill well before the due date! We appreciate your gesture and look forward to serving you better at all times!

Wow, so is Airtel finally beginning to care about their customers? Are they feeling the heat with fierce competition breathing down their neck? Is number portability forcing them to be nicer?

Whatever it is, I'm not complaining since Airtel made me feel nice, for a change.

Update: I happened to tweet this post and got a response from Airtel within 5 minutes! Now that is fast. Airtel have surely improved their social media presence!
Posted by Arun at 2:07 AM 4 comments:

Football fever in god’s own country

Kerala’s passion for football is well known. It is one of the few states in India along with Bengal, Goa and some North eastern states, that has a substantial football following. Football fever reaches a crescendo during world cup time, once every four years. I happened to catch a glimpse of this enthusiasm and energy during my recent visit to Kerala.

When I was traveling on the streets, I saw large banners and posters of top football teams at almost every bus stop or junction, whereas I could hardly see any movie poster or a political party banner! The overwhelming favorite team among local people seems to be Argentina, followed by Brazil. There are lot of local fan clubs for both these teams. The clubs collect money from their members and put together banners supporting their teams.

The worldwide rivalry between Argentine & Brazil fans seem to find an echo in their banners too. Brazilian banners proclaim they are the greatest team and indirectly take a dig at Argentina. Argentine fans in turn try to put down Brazil players in their banners. 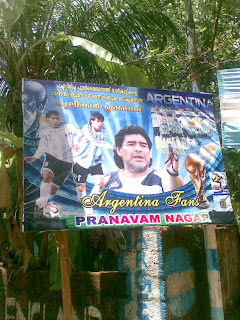 Maradona is undoubtedly the most popular footballer in Kerala. People told me that back in 1986, when Maradona-led Argentine team lifted the world cup, some parts of Kerala virtually resembled the streets of Buenos Aires. People celebrated like crazy as if Maradona was a part of their family! Some crazy fans even offered special prayers in temples while he was playing. Now, almost 25 years later, his popularity remains intact. Here he is seen smoking a cigar. 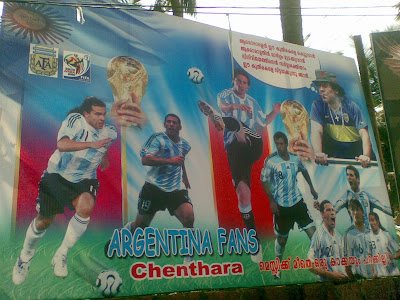 Lionel Messi is another popular name. Here he takes on wings and becomes an angel! 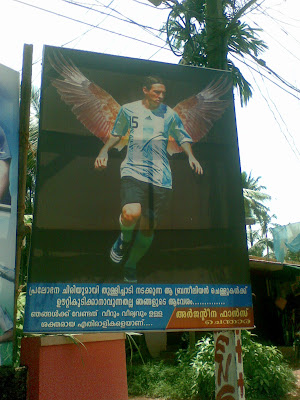 Brazilian banners had pictures of their great players, such as Pele, and current players such as Ronaldinho, Kaka, Robinho, etc. Che Guevara was also seen, both in Argentina & Brazil banners. Couldn't figure out how Che is connected to Brazil!! 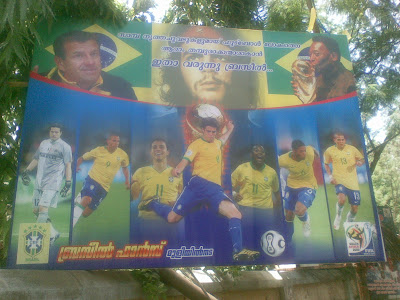 My neighbor told me that flags of Argentina & Brazil are in demand during world cup time. In some areas, fans also paint walls with Albicelestes colors. 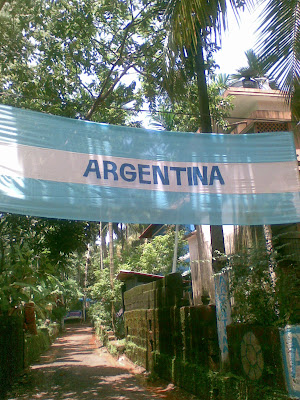 Other teams had supporters too, although they were few when compared to Argentina or Brazil. I saw just one or two Spain, German & Portugal banners. 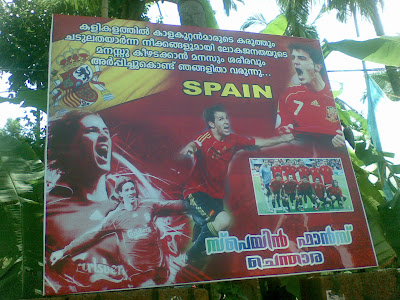 Most people want to see a Brazil-Argentina final on July 11. That would be a dream match up. As of now, both these teams have entered the WC quarterfinals and are on course for a final showdown, unless Germany or Spain has other plans.

I've wondered what makes people love these footballers so much that they spent their hard-earned money and invest time and effort to celebrate their achievements. I think it has got to do with an undying passion for the beautiful game that cuts across all borders of nationality, religion, caste and language.

If you ever happen to visit Kerala during world cup season, try to stop for a moment and savor the atmosphere over there. It is a unique experience, one you can't find anywhere else in India.
Posted by Arun at 7:39 AM 4 comments:

Avatar vs Vettaikaran at Chennai BO

Its going to be an exciting weekend at the Chennai box office with James Cameron's Avatar and Vijay's Vettaikaran clashing with each other for box office supremacy. Both are much anticipated, most awaited movies of the year. Both movies have been promoted well. 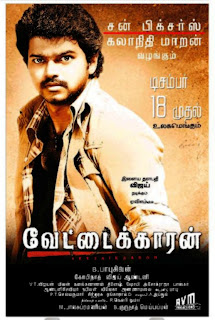 Avatar has been in the making for close to 4 years and is reportedly the world's costliest movie ever. It is releasing in both 3D and 2D versions. It boasts of never-before-seen advancements in 3D and CGI technology. Most importantly, the director of Avatar is James Cameron whose previous works include Aliens, Terminator, Terminator II, True Lies, Abyss and Titanic. The movie has already generated lots of positive buzz around the world. Those who got the see the paid previews are raving about the movie.

Vettaikaran has also been in the making for a while now. Sun Pictures are releasing the movie and they have been hyping it up for the past few weeks. Some people say Vettaikaran is make or break movie for Vijay as his past few movies have not exactly set the cash registers ringing. The storyline of Vettaikaran is unknown as of now. If initial reports are to be believed, Vijay is playing a college student (yet again!). This time around he is a plus two student who fails over and over and finally reaches college. He gets to romance Anushkha and also fights off the baddies in his own style. Vettaikaran songs are already a hit with frequent playtime in FM radio stations. With Vijay's mass appeal and aggressive promotion by Sun pictures, Vettaikaran should bring in the crowds in large numbers.

My gut feel is that both movies will take a bumper opening at the BO. How they fare eventually will depend on the quality of the movie and the word of mouth generated after the initial weekend. Lets see who reigns over the Chennai BO this weekend!
Posted by Arun at 2:02 AM 3 comments:

Happened to watch Se7en on TV yesterday. A dark, disturbing film, gripping till the last frame.

The movie stars Brad Pitt, Morgan Freeman, Gwyneth Paltrow and Kevin Spacey and is directed by David Fincher. This is the second time I am watching this movie and this time I was able to follow the dialogues better, thanks to the sub titles.

The plot is about 2 detectives, played by Brad Pitt and Morgan Freeman, trying to solve a series of murders that seem to be inspired by the '7 deadly sins'. There have been many movies with similar themes in the past, but what makes this one different is the picturization. The director employs a dark visual tone almost throughout, with frequent visuals of dark alleys, rooms, and constant rain in the night. Music by Howard Shore blends with the visuals very well. There is a lot of strong language throughout along with some gory scenes, so the movie may not be ideal for kids.

Casting is another area in which the movie scores. Brad Pitt, Freeman and Paltrow are very aptly cast. Although Kevin Spacey has very little screen time, his character is well etched and remarkable. Watch out for the climax, its totally unexpected and shocking one. The movie is a must watch, especially if you like the drama/mystery genre.
Posted by Arun at 1:51 AM 4 comments: